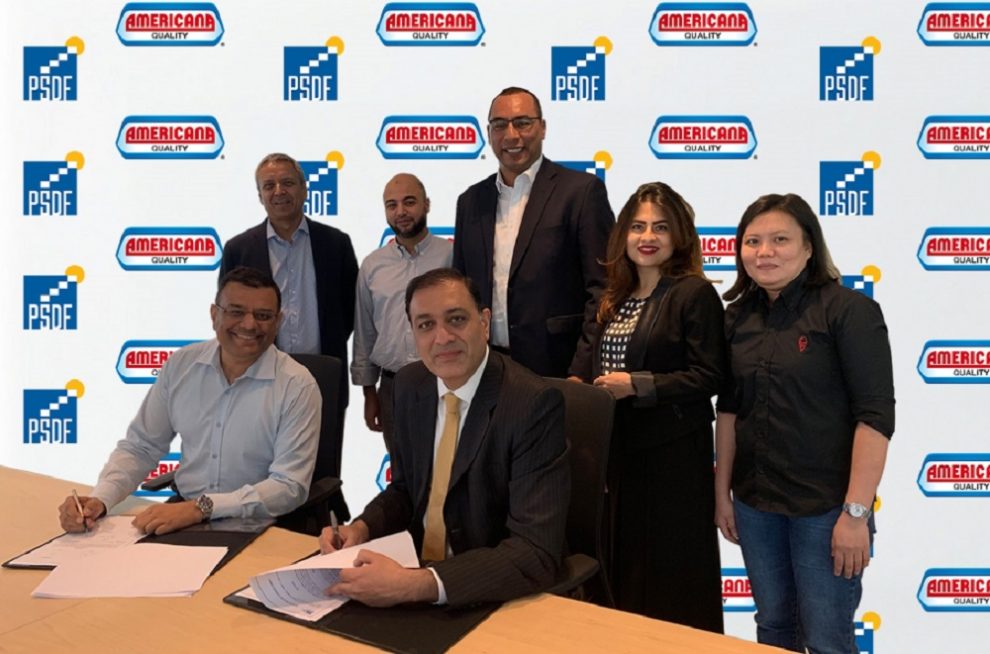 The two parties are committed to creating a successful long-term partnership and give the youth from Punjab a chance to build their careers with one of the leading organizations in the Middle East. In accordance with the MoU, PSDF will fund the training of the workforce, while The Americana Group will employ the eligible candidates across their QSRs in UAE and KSA.

Mr. Sai Gandhi, Chief People Officer, Americana Group said, “Our partnership with the Punjab Skills Development Fund is to attract young talent and grow our pipeline of talent in the Americana business.”

Mr. Jawad Khan, CEO, PSDF said, “PSDF is playing a leading role in partnering with the best organizations in the Middle East and helping them meet their skilled workforce needs from Pakistan. After the success achieved with Atlantis The Palm and Rotana Groups in the hospitality sector, PSDF is very proud to partner with The Americana Group and meet their skills needs in the QSR space. We look forward to growing our mandate with Americana in other areas of their business.”

The Americana Group is one of the most successful organizations in the Middle East region. The group is considered one of the largest food manufacturing and distributing companies in the region. The group was founded back in Kuwait in 1964 and introduced the concept of QSR’s (Quick serving Restaurants) in the regional market in 1970. The group with its two divisions operates 1800 restaurants across the region as well as 25 food production sites across the UAE, KSA, Kuwait and Egypt, offering the safest, most reliable and best quality food.

Punjab Skills Development Fund (PSDF) is the largest skills development fund in Pakistan. PSDF was established in 2010 as a not-for-profit company set up under the Companies Ordinance 1984 by the Government of Punjab (GoPb) in collaboration with UK’s Department for International Development (DFID). PSDF also exclusively manages the skills training funding of the World Bank.

PSDF’s purpose is to shape the future and well-being of our poor and vulnerable youth by giving them access to skills training of the highest standard so they can find sustainable employment and income-generating opportunities in Pakistan and beyond.

PSDF started its operations in the 4 poorest districts of Punjab. Since 2016, The geographical remit has expanded to the entire 36 districts of Punjab. PSDF has trained almost 300,000 underprivileged youth across Punjab, which includes 180,000+ male and 110,000+ female graduates. These graduates have been trained in approximately 250 demand-driven and market relevant trades across 10 sectors.

PSDF has played a leadership role in creating a skills training market with 90% training partners in the private sector. With 400 training partners that deliver training on behalf of PSDF, out of which over 150 are businesses across the 10 sectors. PSDF has adopted an output-based funding mechanism where it funds contract-to-completion outputs as well as completion-to-income generation outcomes.