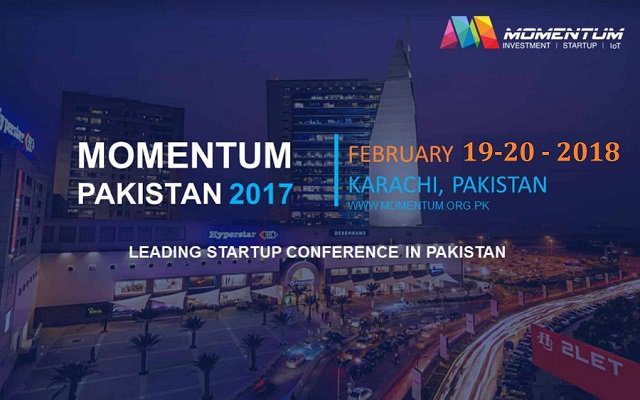 admin
Once a struggling startup, now a success story. A new Pakistan is emerging rapidly, where entrepreneurs are changing the country’s horizons with their brilliant projects. The projects which had just started with a brilliant idea in isolation a few years ago, have now been developed into successful ventures creating lots of jobs and opportunities.
“This all happened thanks to a viable startup eco-system created by industries, mentors, and successful business concerns,” said Momentum Tech Conference founder Amir Jafri, who has unveiled a list of now successful startups that were until 2017 just an idea, or a struggling case. They all got a push through mentoring, funding and support from successful ventures at the Momentum Tech Conference in 2017.
The serial entrepreneur, mentor, co-author of “New Success Secrets”, “L.E.G Formula” and the founder of Global Social Entrepreneurship Foundation, Muhammad Siddique, compiled data on such projects,  says the Momentum Tech Conference 2018 has even more opportunities for the enterprises from its last year’s edition. He says the enterprise world is ready to help the Pakistani entrepreneurs to say goodbye to their excuses.  “This year, Fortune 500 mentors and representatives of world’s top online brands will be in Pakistan to help startups,” he said.
Of the long list of the online startups, there is the Nearpeer.org. This is an online professional courses portal where the users can learn at a self-directed pace. The startup won the second prize at the Momentum Tech Conference 2017. Its co-founder Ammar Ali Ayub who with his friend, tried to be a job provider while graduating from LUMS. Now, he has a team of 25 people and provides jobs to many dozen people. Ammar’s advice to startups is: never give up.
Must Read: Vivo X20 Plus UD With The World’s First Under-Display Fingerprint Sensor Launched In China For CNY 3,600
Ali Gohar Wassan is the co-founder of TheUniPedia, an online portal for universities entry test preparations with self-assessment, explanations and dedicated tutors to enhance the learning level of students. Ali Gohar is himself is a university dropout but he saw an opportunity in directing the people to the university education, and in the process now he provides jobs to hundreds of tutors and a full-time seven people team. Ask him about his secret to success, and smiles: have mentors, leave out excuses and be fair to yourself. He says meetups like Momentum Tech Conference are never to be missed. “It is the venue where from we got payment solutions and universities connections.
Also, at the conference will be Sehat.com.pk Marketing Director Bilal Mumtaz. His online medicine supply is a real breakthrough in Pakistan’s health system. The startup came into being when his project won a $150,000 seed money from a Canadian university, and since then the project has achieved many landmarks and has faced and overcome critical issues like fake medicine supplies. His priority is to provide cheap, good quality medicines to the people in rural areas at their doorstep in the quickest possible way. His secret success is: my network is my net-worth.
The online journey has brought Hyder Khan to Hyderabad from his hometown Badin. This under-30 startup star is running two projects: one, software development and two, accounting consultancy. Just one year ago, he had invested Rs5,000 in his online business and now, he has a team of six people for both businesses.
Qasim Asad Salam’s TheCampusFeed.com is also a new rage among the university students. The idea emerged when this LUMS student was in the final year, and had been finding very hard to connect with other students. He thought of connecting with other students through a social network where everyone could speak on any issue maintaining anonymity. The idea was realized into a reality when it won a Rs300,000 prize at the Momentum Tech Conference 2017. That was a great push, and now the project is being run by six people. His advice to the struggling enterprises: be passionate, do not chase money and be extremely hardworking.
Last but not least stands Sameer Ahmed Khan whose application SocialChamp.io won the first prize at Momentum Tech Conference 2017. His application caters to need all social media users. His story and struggle is very inspirational. A spate of failures did not deter him from working again and again and at the end of the day, he met with success. Such success stories and connections are learned and earned at the events like Momentum Tech Conference. This year, the event is going to be held on February 19 and 20 in Karachi.