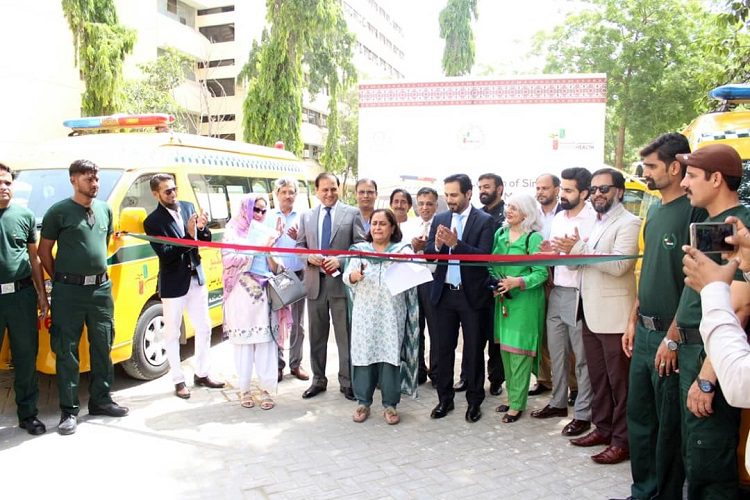 Sindh Rescue and Medical Services’ (SRMS), a project of Government of Sindh, in collaboration withAman Health Care Services, was formally launched at the Sindh Secretariat today. Dr.Azra Fazal Pechuho, Minister for Health and Population, Government of Sindh graced the occasion and cut the ribbon to inaugurate the newly branded ambulances. This marks the official launch of Karachi’s first ever government backed,free of cost,life-saving ambulance service. This welcome development is the actualization of Sindh’s government’s earlier promise of providing quality &free of cost emergency medical service to the citizens of Karachi.

It is to be noted that Government of Sindh initiated its formal support to Aman Ambulances, which had been operating in Karachi through a fleetof 60 lifesaving ambulances, in October 2018. During this period74,776 life-saving interventions have been made and 11 babies have been delivered inside the ambulances, which now bear the emblem of Government of Sindh and are branded as Sindh Rescue and Medical Services.The provincial government intends to expand the size of this fleet incrementally to 200 to cater to the twenty million population of this mega-polis.

A successful project by the name of Sindh Peoples Ambulance Service is already underway in the districts of Thatta & Sujawal with 25 life-saving ambulances since 2017. During the last two years, 51,120 lifesaving interventions have been made, including delivery of 151 babies in the life-saving ambulancesenroute to the health facilities.

Must Read: Emirates refreshing its summer – brings summertime zest to its menus

Health Minister reiterated Government of Sindh’s endeavour towards exemplary public service during the ceremony, “Today is a great milestone for the people of Karachi and fruition of Sindh Government’s unwavering efforts and resolve to facilitate the citizens of this province. We greatly look forward to expanding this lifesaving ambulance service to all districts of Sindh in an incremental manner at the earliest.”

CEO, Aman Foundation, Mujahid Khan, also expressed his gratitude at the launch of the Sindh Rescue and Medical Services. “We are very excited to continue working with the Sindh Government towards this pioneering partnership for setting up world class emergency medical services in Karachi and Sindh. Today marks for us the true actualization of Aman Foundation’s founding vision of bringing about systemic change by incubating public service initiatives for the under-served, and scaling them through strategic partnerships.”

The ceremony was attended by Secretary Health and other senior officials from the Ministry of Health; CEO and senior team members of Aman Health Care Services.

The Sindh Rescue and Medical Services ambulanceswill continue to be run by the able team of Aman Health Care Services whereby the quality control and protocol will remain consistent to their decade-long experience in the field of emergency medical services, for the benefit of the public.

As before, the pre-hospital emergency care ambulance serviceis available by dialling 1021. As has been the practice in the past, and in line with global best practices,the service will prioritize critical and lifesaving interventions across Karachi.