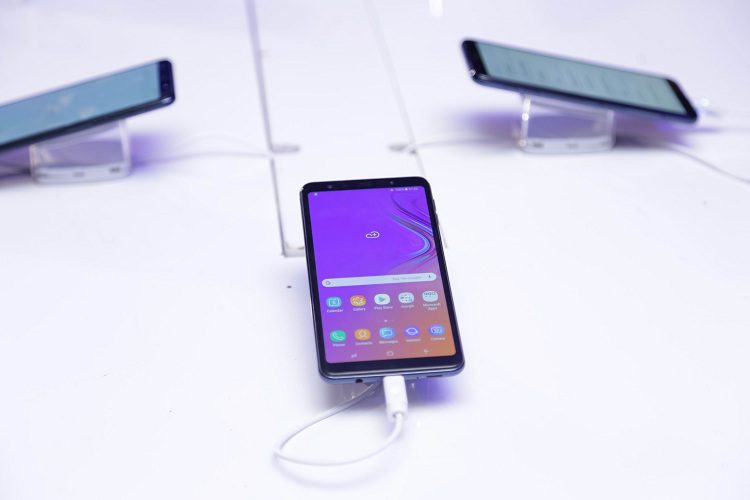 Samsung the global leader in technology and electronics – recently launched its highly-anticipated A7, J4+ and J6+ series of mobile phones. Samsung has always put innovative technologies in the hands of consumers. The all new A and J series have surpassed industry expectations. The Galaxy A7 2018 will also be Samsungs first phone to come with a triple camera setup on its back. The triple camera (24MP-8MP-5MP) will be aligned vertically on the top left rear corner and will include a 24MP main sensor with f/1.7 which will improve the quality of the image by combining four pixels in one in low light conditions. The third lens will be an 8MP ultra-wide sensor in order to capture photos with 120 degrees field of view. Furthermore there is 128 GB of internal storage and an innovative side fingerprint scanner. A grand media ceremony was held at the Pearl Continental Hotel, Karachi where the President of Samsung Pakistan – Mr. Y.J. Kim was the chief-guest. In the A series, the phone launched was the Galaxy A7, and in the Galaxy J series, the phones launched were Galaxy J6+ and Galaxy J4+. The phones feature Samsung’s Infinity Display and have thin bezels at the top and bottom ends, due to the swapping of the physical home button with software powered in-display home button. Additionally, there is a new ‘Chat over Video’ feature that facilitates, chat over any video for an uninterrupted viewing experience. The devices will have a premium glass design and sport a 6-inch ‘infinity display’, octa-core processors. The J4+ features include a 13 MP Rear Camera and a 5 MP front camera with adjustable LED flash. While the J6+ has a dual rear camera 13MP+5MP. Both phones feature the innovative side fingerprint scanner. The president of Samsung Pakistan, Mr. Y.J. Kim stated that: “The Galaxy A & J series has always been our showcase for premium technology and industry-defining innovation. The phones are designed for a level of performance, power and intelligence that today’s power users want and need. Galaxy A & J fans are Samsung’s most loyal; we know they want it all, to get the most out of work and play, and this line up of phones can keep up with their busy lives. Samsung Pakistan is overjoyed in  introducing these power-packed devices to its loyal consumer base in Pakistan, these exciting new device promise a whole new world of information and entertainment while multi-tasking, with powerful global connectivity, for consumers aspiring to excel in today’s highly competitive and fast-paced world. “