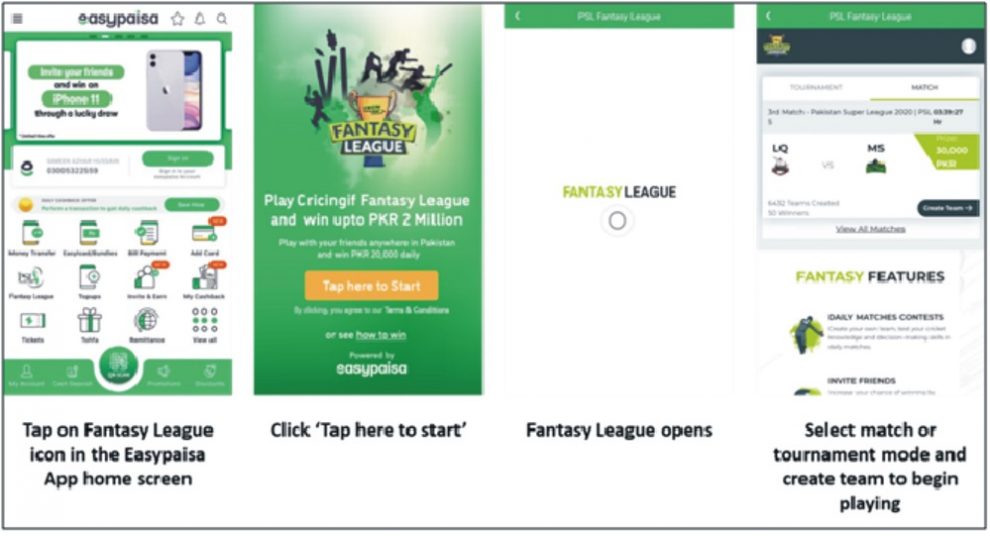 Easypaisa, Pakistan’s leading digital payment solution is expanding the experiences on offer for users by allowing them to be part of the PSL fever at its peak. The PSL Official Fantasy League can now be played through the Easypaisa App. Cricket enthusiasts can create their own virtual teams and earn points throughout the season along with chances to win lucrative prizes at the end of the tournament.

PSL 5 is currently underway and stadiums across the country are packed with cricket enthusiasts supporting their favorite teams and players. Easypaisa in partnership with Cricingif, the official copyright holders for the PSL Fantasy League, has opened the opportunity for users to enjoy the game even more. The PSL Fantasy League has grown in popularity much like the national championship itself. Last year it saw over 3 million unique users with more than 80 million page views.

Must Read: TikTok Till you drop with Pakistan’s No.1 Data Network- Zong 4G

Easypaisa users can now act as team owners, assemble virtual teams of real PSL players and score points based on their cricketers’ stats during the selected match of PSL 5. By playing the Fantasy League users can win a grand prize up to 1 million PKR with daily prizes of PKR 30,000 during the tenure of the competition. With daily match contests and league contests, the Fantasy League has something for everyone. Users will be charged with a standard fee by their respective network operators.

All you have to do is simply login to the EasypaisaApp and tap on the Fantasy League option. This leads you straight to the front page where you can pick tournament or match mode according your preference. All it takes is four easy steps. First select the match of your choice, then add players to your team, pick the captain and vice-captain, and start following the leaderboard.

“In light of Pakistan’s biggest sporting event PSL, we feel honored to present our users with something extraordinary”, Khurram Malik, Head of Easypaisa, Telenor Microfinance Bank, said while commenting on the development. He further added that; “Easypaisa has always been at the forefront of bringing a complete digital lifestyle transformation for its users. This partnership with Cricingif to let users play PSL Fantasy League on the EasypaisaApp allows them to be part of the most exciting tournament in the country with greater fervor and enthusiasm”.

Easypaisa has been instrumental in empowering the society by ensuring the inclusion of the masses into the fold of mainstream banking and financial system. Such exciting games and offers are value addition features Easypaisa offers on top its digital banking services.