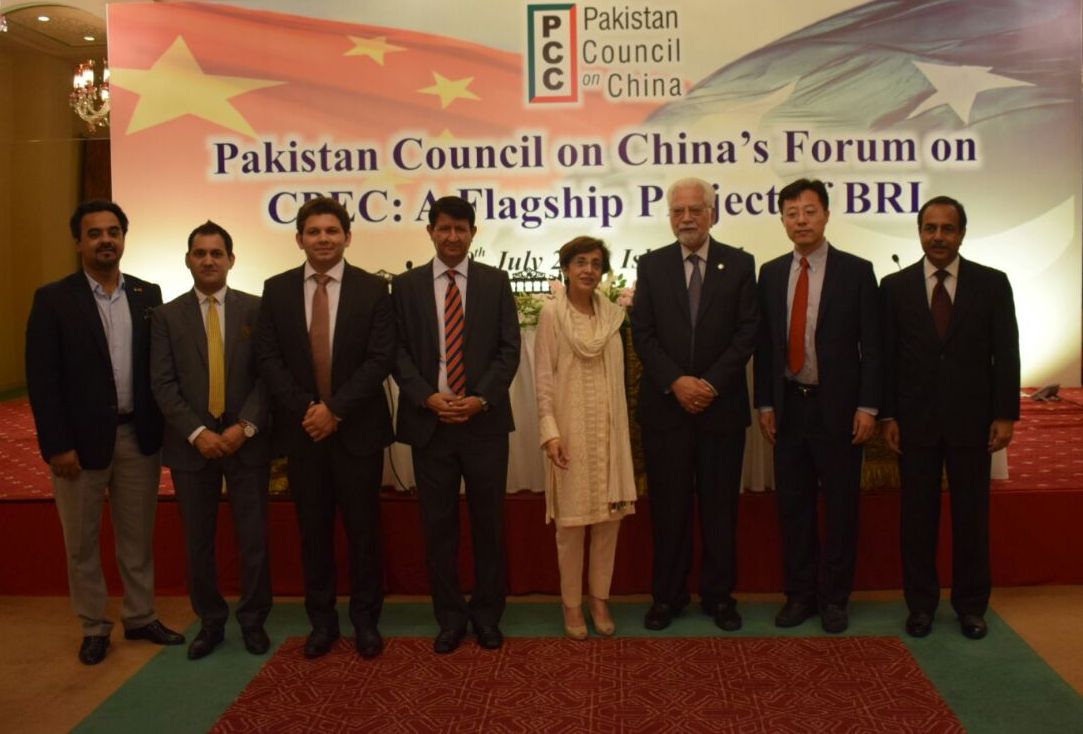 Pakistan Council on China (PCC) hosted its annual forum on the prospects and challenges of China-Pakistan Economic Corridor (CPEC) today in Islamabad.

The aim of the conference was to help promote better understanding for the future opportunities and challenges in the implementation of China-Pakistan Economic Corridor (CPEC).

While discussing the opportunities of this strategically very significant initiative, Pakistan’s foreign secretary Ms Tehmina Janjua said that ” Pakistan believes its long-term prosperity  is inextricably linked to peace and development and we need  comprehensive approaches to regional peace, stability and prosperity.

She further said that our long term  vision of economic development  is reflected in vision 2025 which emphasizes regional connectivity and economic cooperation. CPEC is a natural choice for Pakistan and china. Pakistan’s Eastern neighbor has publicly announced opposition to CPEC and we are well aware of the challenges.  She said that as the flagship project of OBOR, CPEC is destined to serve as a game changer for the whole region.

Chargé d’affaires Chinese Embassy Islamabad Mr. Lijian Zhao highlighted the role of Pakistan and china for regional connectivity and trade saying that ” BRI carries the virtue of peaceful cooperation, openness and inclusiveness, mutual learning and win-win spirit. He further said that CPEC is an unprecedented undertaking in the history of China-Pakistan relations”.

Forum also discussed  cultural, educational and economic  dimensions of CPEC. President of Pakistan Council on China Amb (r) Inam-ul-Haq  said that Pakistan and China enjoy a unique history of mutual respect, trust and friendship. He said that PCC created  in an effort to improve the level and content of communications between the two countries. He further stated that CPEC is the foundation for regional cooperation, improving economic growth and offering trade diversifications.

Director of Pakistan Council on China, Hamayoun Khan said that PCC is without doubt a strong contributor  to the concept of  BRI and CPEC  with our intellectual advantage. He further said that every Pakistani and Chinese are looking forward to great success of CPEC which will ensure the brighter future of the whole region.

Pakistan Council on China (PCC), a think-tank that was established in 2012, a year before initiation of China Pakistan Economic Corridor (CPEC) in view of the significance of expanding Sino-Pak bilateral relation. PCC is an independent, non-political, non-partisan body constituted to promote Pak-China relations.

IBA-Karachi signs up as Knowledge Partner for 17th ITCN Asia Exhibition
COMPANIES MUST BE AWARE OF THE FINANCIAL IMPACT OF CLIMATE-RELATED RISK, SAYS ACCA
Comment