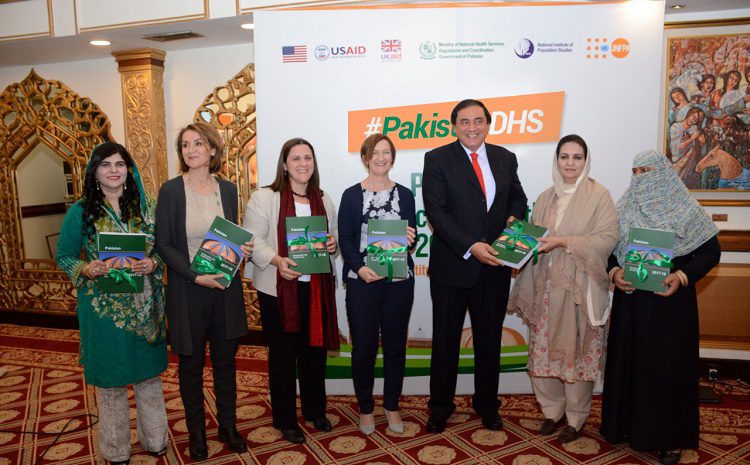 Families in Pakistan are getting healthier according to the newly released 2017-18 Pakistan Demographic and Health Survey (PDHS). The 2017-18PDHS is the fourth DHS survey conducted in Pakistan since 1990-91. The survey results, released today at a national seminar in Islamabad organized by NIPS, highlight major improvements in child survival and maternal health care, while progress has been slower in nutrition and family planning use among women.

On this occassion Ms. Nosheen Hamid parliamentary secretary of Minister of National health services express her views ” pakistan demographic and health survey 2017-18 provides important data on reproductive health, nutrients, family planning, disability, migration and violence against woman. It provides useful information for program managers to develop effective strategies and planning for maternal and child health initiatives. The survey highlights how much more work has to be done UN child and maternal health programs to make it more result oriented. It’ll help us to achieve PM Imran vision of healthy Pakistan by providing better health services to children and mothers. I welcome population surveyors, students, NGOs and other relevant departments to come forward by analyzing this data to develop and implement better health initiatives.

More children in Pakistan are surviving early childhood than ever before as under-5 mortality has sharply declined. Currently, the under-5 mortality rate is 74deaths per 1,000 live births, a decline from 89 deaths per 1,000 live births in 2012-13. This means that approximately 1 in every 14children in Pakistan does not survive to their fifth birthday. Basic vaccination coverage has improved in Pakistan. Two in three children age 12-23 months have received all eight basic vaccinations, an increase from more than half of children in 2012-13. Basic vaccination coverage is lowest in Balochistan (29%) and highest in Punjab (80%).

Reproductive health care coverage in Pakistanis also improving Nearly 9 in 10women age 15-49 receive antenatal care from a skilled provider such as a doctor, nurse, midwife, or lady health visitor. Additionally, more than half of women have their first antenatal care visit in the first trimester, as recommended. Half of women make four or more antenatal care visits, a notable increase from 37% in 2012-13. More births are delivered in a health facility, from 48% in 2012-13 to 66% in 2017-18. Yet, 1 in 3 births are delivered at home.

One in nine persons in Pakistan have moved to their current place of residence from another place. Fourteen percent of households had at least one out-migrating member. The most common reasons for out-migration are better economic opportunity and marriage.

For the first time, the 2017-18 PDHS provides information on disability. Among adults age 15 and older, 9% of women and 7% of men have a lot of difficulty or cannot function in at least one domain of disability – seeing, hearing, communicating, remembering or concentrating, walking or climbing steps, and washing all over or dressing.

Dr Ruth Lawson, Head of Basic Services at the UK’s Department for International Development (DFID) stated, “The UK is proud to have partnered for the survey, as good data leads to evidence-based decision making both by the Government and development partners. I’m glad that this survey reports on disability as well, as DFID’s programmes are especially focused on leaving no-one-behind.”

While the 2017-18 PDHS reports progress in many areas, challenges remain particularly in nutrition, family planning, and domestic violence.The survey shows that many children in Pakistan suffer from poor nutrition. One sign of chronic under-nutrition is stunting, or being too short for one’s age. Although stunting has declined since 2012-13 when 45% of children under 5 were stunted, still 38% of children in Pakistan are too short for their age. Currently, women in Pakistan are more overweight or obese than ever before, 52% of women age 15-49 in 2017-18 as compared to 40% in 2012-13.

Pakistan has one of the highest fertility rates in the region with an average of 3.6 births per woman. The use of family planning among married women has stagnated around 34% over the last five years. The unmet need for contraception remains high at 17%.More work needs to be done to improve the availability and choice of family planning information and services. USAID Deputy Mission Director, Helen Pataki, noted that the PDHS is not just a report card on the last five years; it also directs our efforts for the next five. “Together, we can review what has worked well and where further support could make a difference to improve basic health care and end preventable deaths.”

Ms. Lina Mousa, UNFPA Representative said, “UNFPA is very proud to have contributed, both financially and technically, to the successful implementation of the 2017-18 PDHS, and congratulate the National Institute of Population Studies (NIPS) and Government of Pakistan for this timely achievement.” She commended the strategic partnership of UNFPA with NIPS and Pakistan Bureau of Statistics on strengthening the national data system that is essential for development planning in the context of the SDGs and the International Conference for Population and Development. “Population censuses and PDHS surveys are crucial to the development of national strategies and socio-economic plans as well as localization of the SDGs.”

The 2017-18 PDHS provides estimates at the national level; for urban and rural areas separately; for four provinces including Punjab, Sindh, Khyber Pakhtunkhwa, and Balochistan; for two regions including Azad Jammu and Kashmir (AJK) and GilgitBaltistan (GB); Islamabad Capital Territory; and FATA. The national total for indicators does not includeAJK and GB.

The 2017-18 PDHS was implemented by NIPS under the aegis of the Ministry of National Health Services, Regulations,and Coordination, Islamabad, Pakistan. ICF provided technical assistance through The DHS Program, a project funded by USAID that provides financial support and technical assistance in the implementation of population and health surveys in countries worldwide. Support for the survey was also provided by DFID and UNFPA.