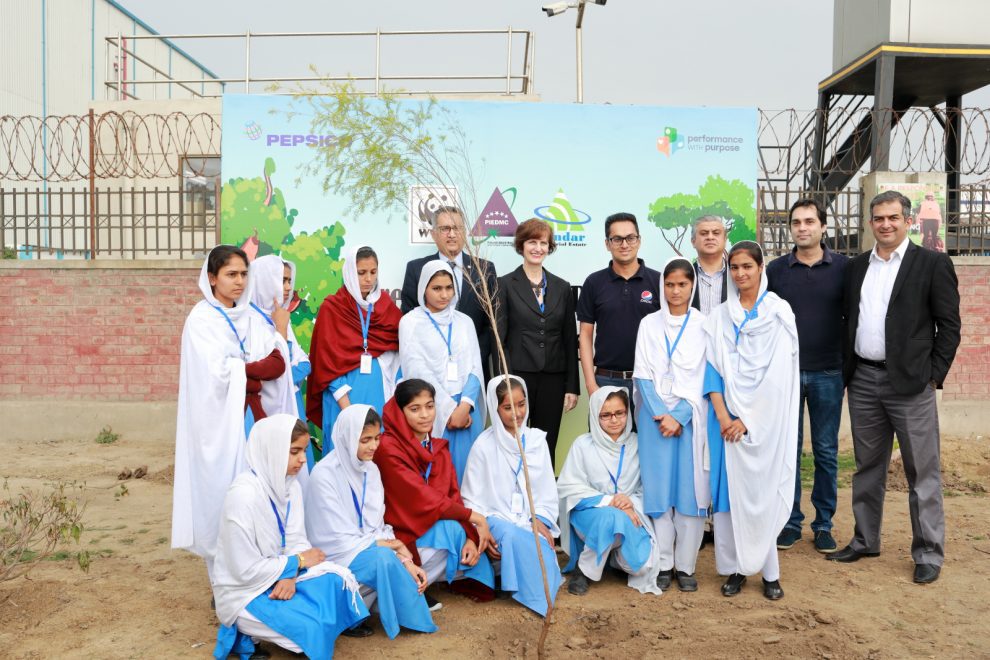 WWF-Pakistan and PepsiCo pledge to mitigate climate change for Earth Hour 2018. Lahore, as well as other cities in Pakistan, are losing green spaces and natural ambience. We need to revisit our development schemes and address the environmental concerns arising as a result of this. This was stated by speakers during a tree plantation drive jointly organized by WWF-Pakistan and PepsiCo at Sundar Industrial Estate (SIE), Lahore. The drive is part of PepsiCo’s commitment to plant trees for environmental sustainability, and has been initiated as part of WWF’s Earth Hour which will be observed on 24 March 2018 across the world.

WWF-Pakistan is supporting PepsiCo to fulfil its commitment of planting a total of 22,000 indigenous trees mainly in Changa Manga, while 2,000 will be planted by PepsiCo in other locations including SIE. The main purpose of the drive is to enhance health, improve air quality and mitigate the adverse impacts of climate change.

It was shared that the lack of green belts and increased concrete cover has led to elevated temperatures in cities. Furthermore, new developmental projects and housing colonies are threatening the existence of greenery and the subsequent cutting of trees not only escalates greenhouse gas (GHGs) emissions but increases temperature and vulnerability to extreme weather events. It also has adverse impacts on groundwater recharge.

Must Read: PTCL Declared As The Fastest Growing Brand In Pakistan

During the ceremony, Furqan Ahmed Syed, General Manager and Vice President of PepsiCo Pakistan, said, “Today’s event is rooted in our governing philosophy of ‘Performance with Purpose’ – our commitment to making healthier products, protecting our planet and empowering our associates and the communities we serve.”

Speaking on the occasion, Hammad Naqi Khan, Director General WWF-Pakistan said that according to NASA and the National Oceanic and Atmospheric Administration the year 2017 was among the three warmest years on record. “There is an urgent need to connect people to nature as part of our shared responsibility and sustainable future.  Pakistan has the highest annual deforestation rate in Asia and forests cover is less than 2.5 per cent of the total land. There is an urgent need to initiate massive plantation drives in and near metropolitan cities to reduce the adverse impacts of climate change.”

He also shared that although Pakistan is not contributing much to climate change it ranks among the top ten most vulnerable countries and is exposed to its adverse impacts such as extreme weather events, more persistent droughts, floods and heatwaves. He emphasized the need of public-private partnerships to promote the cause of the environment in the country.

U.S. Consulate Lahore’s economic chief Ann Mason said that trees are essential to life on Earth, and provide vital ecosystem services like clean air, water, food, timber, medicine and many other benefits. To better protect the environment, she added, there is a need to value and conserve trees and forests that help reduce carbon emissions and provide livelihood opportunities to local communities.

Earth Hour started as a symbolic lights out event in Sydney in 2007, and has now grown to engage individuals, business and organizations in over 7,000 cities and more than 180 countries and territories during the hour and beyond. Earth Hour 2018 will be celebrated on Saturday, 24 March 2018 between 8:30 p.m. and 9:30 p.m. local time. As accelerating climate change and staggering biodiversity loss threaten the planet, the movement will bring together millions of people to connect to Earth and spark never-before conversations on climate change and the loss of nature around them, undeniably the need of the hour.

As the staggering decline in biodiversity threatens climate action and sustainable development globally, Earth Hour 2018 focuses on shining a light on the accelerating biodiversity loss on our planet. The movement invites hundreds of millions of WWF supporters and global networks to ‘spark’ urgent conversations on loss of nature around them. This year WWF-Pakistan is focuses its efforts on real goals to combat climate change by urging the government, private sector and individuals to plant indigenous trees. So far the organization will plant close to 45,000 saplings, out of which 22,000 are part of PepsiCo’s commitment.