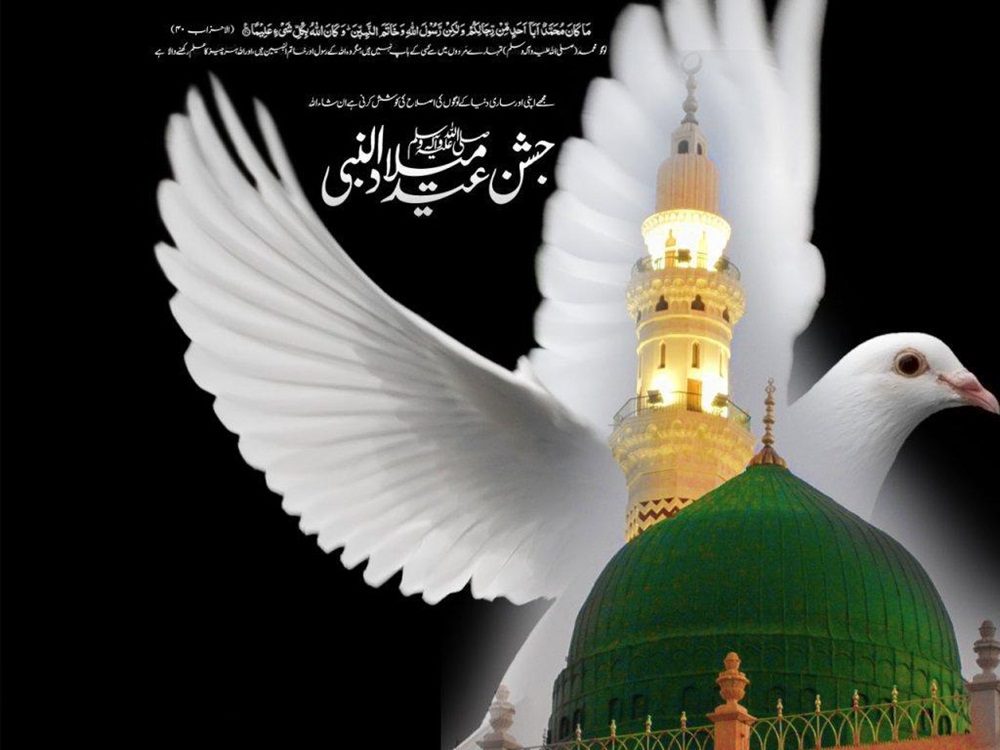 Muslims celebrate Eid-e-Meelad-ul-Nabi (PBUH) on 12th Rabi-ul-Awwal. Govt officially announces holiday for this day and muslims believe that this eid is above the other two eids  (Eid-ul-azha and Eid-ul-Fitr) because all the blessings are due to arrival of Muhammad  (PBUH) so the day of his birth is of more value than all the other islamic events.

On this eid Muslims decorate their homes, streets and markets. Everywhere lighting and recitation of Naats give an endless satisfaction. Muslims share gifts and delicious foods. Mostly, Muslims wear especial religious dresses such as white Kurta Shalwar and green Amaama Sharif. Mahaafil- e- Meelad continue till the end of the month recitation of Quran and drood O salaam add to the pleasures of this month.

On this day religious processions and addresses of Ulama do a lot to provoke harmony among the people. Prayers for the wellfare of all the Ummah in this world and the world after death also excite the spirit of good deeds.

Though the day of Eid is 12th Rabi-ul-Awwal, the whole month is of so much pleasures and blessings that each day seems to be the eid day.

Different fiqh have their own opinion about this eid. Some say that it should not be celebrated because thus is the day of Muhammad ( PBUH )’s death. But those who celebrate it opin that the demise of Nabi (SAW) is not just a concealment of his bodily presence on the Earth. They are of the view that he is not a common man created by flesh and bones only, Allah shared his Noor to create Muhammad ( PBUH ) so how can a person born with his Noor can die when Allah himself can’t die.

But we should not indulge ourselves in religious disputes rather we should let others with their own beliefs because Allah treats a man according to his belief on Allah. And then most important thing is belief of Khatam-e-Nabuwat, through Quran Allah has addressed us to believe that Muhammad is the last prophet of Allah, to celebrate the day of his birth or to argue his demise from the Earth would be the matter of Allah’s blessing and he will pass us in the final exam either we celebrate this day as eid or not; but the condition is the purity of our beliefs on what we say.

Being one of those who celebrate this eid I would like to say Eid-e-Meelad-ul-Nabi Mubarak to all the Muslims anywhere in the world with a bundle of prayers for success in every exam of life and when the life will start again for not to end.